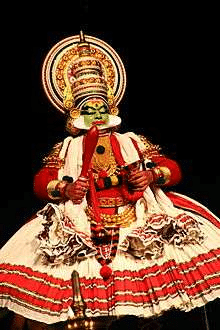 We shall be holding three days of workshops based on this ancient art form led by Vijay and Barbara Vijayakumar.

KATHA [meaning story] KALI [meaning play] evolved from earlier temple art forms in the 17th century. It is based on Hinduism, is a highly charged powerful drama that combines devotion, drama, dance, music, costumes and make up to produce one of the most impressive forms of sacred theatre in the world.

Kathakali is ancient and classical in nature holding centuries of tradition and culture. It is not simply a dance-drama but an act of devotion featuring the universal struggle between good and evil.

The Hindu epic stories in India were often told through a language the local people could understand â theatre. The stories were passed from one generation to the next as they were performed in the heart of their rural communities.

This will be a unique opportunity to handle and restore ancient costumes and find out from Barbara how the three dimensional make up known as chutti is applied.

Conservation of Kathakali costumes, how they move and the characters they represent.